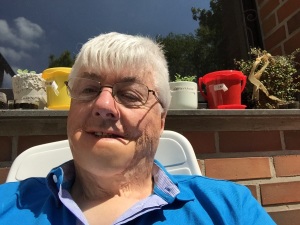 I was asked the other day if I had any legacy issues after all my operations, and I answered ‘no’. It was an interesting question though, and one I hadn’t been asked for many years. Later, when I had time to reflect on it, I realised that while I haven’t  any pain, I am occasionally uncomfortable.

For example, my mouth doesn’t close naturally like most people’s – it takes effort to keep it shut because it lacks both muscle and nerves. There’s a little soreness there at times, but it’s more awkward than anything. The chin itself has very little feeling, which is good in the winter if I’m out and about, but the large flabby lower lip aches occasionally.

I wrote before about how food collects in the corners of my mouth, something I am not usually aware of until someone – usually my family – point it out. The same goes for dribbling liquid. Because I have so little feeling on my chin I rarely notice. And because of that lessened feeling I sometimes have to guess when drink/food has made contact with my lips. Sometimes I get it wrong! It doesn’t happen too often these days as I am more used to it.

My left hand always aches in the winter as the cold seems to affect the fingers more. It’s not as bad as it used to be following an operation to open out the fingers, which were turned in. Then, I used to dread the cold because it felt like the hand had been dipped in icy water. The left hand also lacks some muscle and tissue which was grafted onto my face, which means it’s a fair bit weaker than my right hand. As I have aged the problem is more noticeable, so I have to be careful when opening doors. Occasionally I get a slight tremor in the weaker hand, and if I happen to be holding a cup of tea or coffee then I can spill the contents. Again, just a minor thing.

I’m lucky that my limbs function and are intact. I met someone a few months ago who has a facial disfigurement. We were chatting and so absorbed in conversation that about 90 minutes into our meeting I was surprised to discover one of her hands was also badly burned. It hasn’t stopped her using the injured hand. Not too many months ago I met another friend whose burn injuries were also extensive. His hands were severely disfigured, yet he works as a professional gardener. So even injuries are not necessarily a handicap – or at least a severe impediment – to leading a fulfilling life.

I have nothing to complain about really and a lot to be grateful for.

2 thoughts on “Do I still have pain? Sort of”